Race-Baiter: How the Media Wields Dangerous Words to Divide a Nation 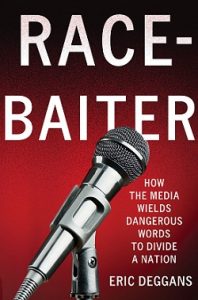 At a time when political candidates leverage fear of immigrants and Muslims into votes while the nation debates issues of policing and people of color, the need for media coverage more finely attuned to race and prejudice could not be more clear.

But instead of informing audiences, many of the fastest-growing news programs and media platforms are playing on old prejudices and deep rooted fears to compete for increasingly narrow audiences. Using the same tactics once employed to mobilize political parties, they send fans coded messages and demonize opposing groups as their audience share soars and website traffic ticks up.

Race-baiter is a term born out of this tumultuous climate, coined by the conservative media to describe a person who uses racial tensions to arouse the passion and ire of a particular demographic. Even as the election of the first black president forces us all to reevaluate how we think about race, gender, culture, and class lines, some areas of modern media are working hard to push the same old buttons of conflict and division for new purposes.

In Race-Baiter, veteran journalist and media critic Eric Deggans dissects the powerful ways modern media feeds fears, prejudices, and hate, while also tracing the history of the word and its consequences, intended or otherwise.

Get Your Copy Now

"Deggans, the TV and media critic for the Tampa Bay Times, dissects how popular pundits and anchors concoct a web of hate and untruth to recruit viewers, saying " trust us, not them." Much of the emphasis is on the provocative nature of FOX News, under conservative media guru Roger Ailes and featuring the right-wing stars Bill O' Reilly, Glenn Beck, and Sean Hannity. Whether it's media coverage of President Obama, Trayvon Martin, Sandra Fluke, or the 2008 presidential election, the shadow issues of race and gender infect the national dialogue with code words and manipulated images, saying that "any journalism that opposes their core values is dishonest and inaccurate." In this thoughtful, controversial book, Deggans explores the racial strategies he sees used by conservative media for political advantage, and also cites the blow-by-blow battles between FOX and MSNBC. (Oct.)" 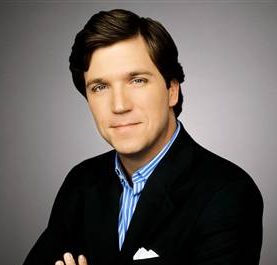 "The Internet allows people to tailor their news consumption so precisely, that its possible that people will never run into views they disagree with, and that’s a distressing possibility. You ought to be challenged."

Fox News pundit and founder of the Daily Caller, page 63.

The first and only time I met Fox News Channel star Bill O’Reilly, he looked at me like I owed him money.

The situation was, I will admit, an uncomfortable one. He and a publicity executive at Fox News had already turned down an interview request for this very book, despite the fact that he inspired the title. And though he planned several stops around my St. Petersburg, Fla., home base to tout his own book in early 2012, sharing a cup of joe with me was not particularly high on his to-do list.

That’s because we have, as a therapist might say, a bit of history.

At various times on his top-rated evening cablecast, O’Reilly has called me “dishonest,” “racially motivated,” and “one of the biggest race-baiters in the country” for criticizing the way he talks about race on his program.

So as I planned this tome on how race issues and prejudice play out in media, I wanted to talk with O’Reilly. And he didn’t want to talk with me.

What seemed obvious, then and now, is that we don’t have a great vocabulary for talking about any of this. And too often, instead of having a respectful dialogue, we fight.

All of which I wanted to discuss with O’Reilly in Sarasota. But my first question, asking why he called me a race-baiter, didn’t get much response. “I don’t have that quote in front of me,” he said. “I’m not going to answer quotes that I said four years ago. ‘Cause I don’t know what the context is. I can’t answer the question because I don’t know. If you have a transcript, I’ll take a look at it.”

But you said back then that white people couldn’t talk to black people about issues of race, I answered. Do you feel the same way now?

“All I know is I did a commentary on a restaurant in Harlem, Sylvia’s, where I was very complimentary about the restaurant and what went on there … (and) I got shattered by ideologues who were just looking to take things out of context,” he said. “I think it’s a press problem, not a people problem.”

Then why did he air a commentary blaming Rev. Jeremiah Wright, Media Matters, civil rights activist Jesse Jackson, and me for helping create a climate where “good people (are being driven) away from constructive dialogue that might advance racial harmony”? And why did every example of dubious “race-baiting” he cited feature allegations of prejudice against white people?

If we’re all equal, can’t white people make mistakes, too?

It wasn’t always this way. Before the rise of niche outlets such as cable TV, satellite radio, websites, and social media platforms, big media outlets made their money by seeking to serve huge, diverse audiences and selling advertisers access to them, creating a shared cultural dialogue in the process.

When Capt. “Hawkeye” Pierce left Korea on the last episode of CBS’s hit comedy M*A*S*H, or Bill Cosby’s Cliff Huxtable saluted the nation’s first observance of Martin Luther King Jr. Day on The Cosby Show, offices across the country were consumed with talk of what had happened the night before. Mass media was the country’s open hearth, where big media companies worked hard to unite audiences in feeding their own massive bottom lines.

But today’s fastest-growing media platforms now focus on smaller segments of the audience — the plumpest parts of a seriously fragmented viewing/reading/listening public. And one way to ensure that those audience segments develop fierce loyalty is to feed them messages demonizing other outlets and the groups who might gather there.

It may sound cynical. But in a fragmented media culture, hate sells.

In certain pockets of media, the same tactics once used to mobilize political parties and committed voters are now used to secure audience share and unique website visitors. Even as the election of the first black president forces us all to re-evaluate how we think about race, gender, culture, and class lines, some areas of modern media are working overtime to push the same old buttons of conflict and division for new purposes.

It may seem that such arguments are leveled disproportionately against right-leaning media outlets such as Fox News Channel, but perhaps that’s because conservatives have refined this success-by-segmentation strategy to a fine art, led by some of the best communicators in the business. On the liberal side, MSNBC’s efforts to emerge as a left-leaning alternative are balanced by its connection to an old-school broadcast entity, NBC News. Small wonder, then, that former Vice President Al Gore’s cable channel Current TV began in 2011 courting an audience to the left of MSNBC, backed by expatriates from that channel such as Cenk Uygur and, for a short time, Keith Olbermann.

There may be only one cure for this increasing balkanization: changing the audience itself. It’s time to build a more savvy crowd that demands more from its media products and rejects the tactics of division. Judging by the feedback I’ve gotten from readers, Twitter followers, and Facebook friends, there’s a hunger for more evenhanded material and some guidance for sorting the news from the noise.

For some, this message doesn’t seem so important. Particularly if your culture is one of the broad niches used as a target audience, it can feel like media outlets are simply working harder to tell it like it is — relating news and perspectives that feel correct because they are more closely tailored to your tastes and outlook than ever before. (Comic Stephen Colbert calls this phenomenon “truthiness,” or the certainty of following your feelings and emotion over actual facts.)

But for a look at the other side of that coin, I often describe an old print advertisement published in some black-focused magazines in the 1970s, showing a young black boy with a towel pinned on his back, looking into a mirror and imagining himself as the world’s greatest superhero.

The jarring twist: The heroic face that looked back at him from the mirror belonged to a white man.

This work is never done. Too often, it feels like some people celebrate an advance in diversity or social justice issues simply for the relief it provides. Under that kind of thinking, the election of a black president isn’t just a major landmark for the history of American government; it’s a justification to shut down discussion of institutional racism. After all, if a black man can be elected president, surely America is done with racism and institutional prejudice?

In an odd way, that kind of thinking has helped keep the nation’s first black president from talking very much about race issues at all. Between political opponents who accuse him of playing the victim and others who assume his election means we can finally stop having these conversations completely, Barack Obama has been pushed into keeping silent about the biggest achievement in race relations since the passage of the Civil Rights Act: the story of how a black man named Barack Hussein Obama actually got elected president of the United States of America.

I can’t wait to read the book that President Obama writes when he’s finally out of the Oval Office and out of politics.

Here, I hope to explore the lessons I’ve learned from writing critically about race, social issues, and society for more than a dozen years, unraveling the potent tangle of messages that so often pit us against each other.

Along the way, I hope to turn us all into race-baiters of a sort: those working together to insist on a new way of communicating from a media structure too addicted to controversy, division, and conflict to make it happen alone.

Perhaps, at long last, it’s time for the audience to save media from itself.

From Race-Baiter by Eric Deggans. © 2012 by the author and reprinted by permission of Palgrave Macmillan, a division of Macmillan Publishers Ltd.